Welcome to our new online banking. If you are an existing mobile app user, please use your mobile app login to signin.

Kim Eriksmoen is preparing for her son to start college and offers her thoughts on how she prepares to send him out into the world.

Classes start on August 27th at Bismarck State College.  Charlie’s very excited, but I’m trying to think of everything I need to tell him before he is living on his own.  He wrote the check for the deposit on his apartment – he’s moving in with another classmate – and I explained to him how to use his register to track his spending.

I know he’ll be responsible.  He’ll start his first year away as a sophomore.  He completed most of his general education classes and even made the Dean’s List at Bottineau State College while also attending high school, so he knows what to expect in his classes.  He’ll have much more hands-on classwork once he begins studying Farm and Ranch Management.

We’ve been walking him through how to use the mobile app to upload checks, transfer funds, and monitor the use of his debit card.  For the debit card, I printed off the Shared Branch ATM locations in the area.  We’re also offering him more high-level financial tips, like how to watch his spending, limiting the transfers from his savings account, and paying his bills first.  Budgeting is a big part of his college experience.  He has scholarships, but he still has to know how to watch his account.

I’m spending our last couple months together trying to offer him practical suggestions, as well as life advice.  My biggest advice to him: think before you do something.  I’m not nervous, though, as we have extended family in the Bismarck area, so he will have plenty of friends around, and eyes to keep watch on him.  I suggest he hang out for a month and get his routine down.

He hopes to get a job once he gets settled.  During high school he worked caring for livestock and he now has half a dozen calves of his own.  He’s going to be studying what he already knows he loves.

I don’t know what to expect when Charles comes home after his first semester or his first year.  Maybe he’ll be a little more responsible in caring for his room and his apartment and appreciate the efforts necessary in having your own space.  I stress upon him the importance of smart decisions.  Think before you do something.  It’s a whole big world out there. 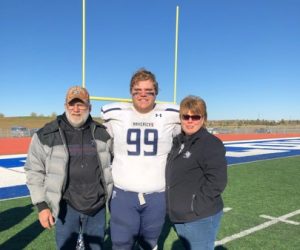 Get notifications in your mailbox when the blog is updated. Sign up now!

YOU ARE NOW LEAVING DAKOTAWESTCU.COM

Dakota West Credit Union provides links to web sites of other organizations in order to provide visitors with certain information. A link does not constitute an endorsement of content, viewpoint, policies, products or services of that web site. Once you link to another web site not maintained by Dakota West Credit Union, you are subject to the terms and conditions of that web site, including but not limited to its privacy policy.

You will be redirected to
in 3 seconds...